Interview with Deborah Tadema, author of “No Honor Between Brothers” 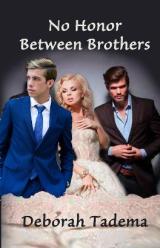 What is your book about?

“No Honor Between Brothers” is about how one man’s infliction can influence a whole community. Mitch Wilder is addicted to sex. And he’s afraid of losing the woman he’s in love with. Mitch finds out that Claire had an affair with his step-brother, Tom Fleming, and vowed to keep them apart. When Tom moves into their hometown to help Mitch with the family business he comes up with a plan. Convince Claire to marry him.

Claire Lester has a habit of falling for the wrong man. And as far as her father is concerned, Mitch Wilder is the last man he wants his daughter to get involved with. He tries to steer her toward Tom. But Claire is obsessed with Mitch and desperately wants to believe that he has changed. Eventually, she does marry Mitch but it doesn’t go very well. She catches him with another woman and runs to Tom.

Tom doesn’t want Claire. Not really. He pretends to chase after her to get back at his brother for treating him like shit. But after she leaves Mitch, she moves her stuff into his apartment while he’s away. Tom feels guilty for using her. At the same time doesn’t want to hurt her. He did love her, as much as a man like him could.

Why will readers relate to your characters?

All of my characters are special to me. As I write about them I try to become them, get inside their heads to think their thoughts, feel their feelings, and so on. This helps me to keep them true to themselves. I hope that my readers can identify with at least one character in the book. Each one has some sort of hang-up, whether they know it or not. From the adults dealing with their own heartaches, to the teenagers who are finding themselves.

Do you have a special techniques you use to develop the plot and stay on track?

I have no special technique. The characters tell me what they want. I know this probably sounds crazy, but it’s true. As each personality develops the braver they become. My biggest challenge is not letting them get too far out of line.

How, or when, do you decide that you are finished writing your story?

When the story has some sort of conclusion. Even if it leaves the reader wanting more. And I hope that I have enticed the reader enough that he or she will want to read the next book of the series. That they have become involved with my characters and are curious enough to want to continue on.

What challenges did you face as you wrote this book?

One of my biggest challenges was to limit the amount of characters. Which is hard when you’re writing about the people in a small town. Because everyone is connected. Another challenge was to keep the reader interested and not get too tired of one of the characters.

What’s your writing schedule like? Do you write a certain amount of words each day?

I don’t punish myself and say that I need so many words each day. Some days I can write all day, other times nothing comes to mind. Yet, I’m able to produce quiet a bit in a week. Some of my best ideas come to me at three in the morning while I’m trying to sleep.

What are you working on right now?

I’m working on the next book of the “Honor” series. It will reveal more of Mitch’s secret life. And shows how much of an influence he’s left on his home town, even when he’s not there.

What is the first story you remember writing?

The first story I remember writing is when I was in high school. It was for an English assignment. It was about a girl in distress and a hero saves her. Each of the characters were named after cars: Ford, Chevy, Dodge, etc. That’s all I remember about it. I wish I had kept it.

Have you always wanted to become a writer?

Yes. But it wasn’t until recently that I became serious about it. Also, I have more time to write.

How many stories do you currently have swirling around in your head?

Several. And I keep gong over my current book that I’m working on, to improve it. Right now I can think of two other series I’d like to publish. I don’t want to give too much away here so that’s all I’m going to say about that.

Do your characters ever take on a life of their own?

Yes, all the time. Sometimes it’s hard to rein them in. I try hard to keep things as realistic as possible and my characters from doing something that is totally out of left field.

Have you ever had difficulty “killing off” a character in your story because she or he was so intriguing and full of possibility for you, his or her creator?

It is always difficult to “Kill” someone. But I have in this book only because I felt that the character wasn’t developing anymore. And sometimes to give the story a new twist.

Where can people learn more about your book?

People will be able to find my book “No Honor Between Brothers” at Second Wind Publishing Company. Scheduled to be released soon. http://secondwindpublishing.com/